In many personal injury claims there is a need to assess the future loss sustained by an injured party and part of that process involves calculating a multiplier. In basic terms, the multiplier is a figure by which any annual loss, known as the multiplicand, will need to be multiplied by to calculate the future loss. This figure assumes that by receiving a lump sum in damages it can be invested, so it takes into account an assumed rate of return which the party can receive on the money if invested. Since 25th June 2001 the rate has been fixed by the Lord Chancellor at a rate of return of 2.5%.

It will be clear to all readers that since the last rate was fixed there have been a vast alteration in the return that can be achieved on money invested and earlier this month, as a result of numerous requests from the Association of Personal Injury Lawyers and the threat of a judicial review hearing, the Lord Chancellor announced that she would announce the outcome of a review of the rate by the 31st January 2017.

This review has been very overdue and in figures from the Personal Injury Lawyers it is proposed that the rate of return to be used to calculate future loss multipliers should be between -0.5 and -1%. This change will have the effect of increasing awards for future loss, to more appropriately reflect the return that a cautious investor who needs to call on any monies regularly may in real terms achieve.

Rather than this announcement being met by the insurance industry with an acknowledgement that it is right and proper that genuine Claimants should receive fair awards for future loss, reflecting the real return they can achieve on their compensation, the Association of British Insurers have issued judicial Review and Injunction proceedings to try and block this long overdue review. Clearly the season of goodwill does not extend to all genuine personal injury Claimants, well certainly not as far as the ABI are concerned!

The effect of this uncertainty is an unfair delay to Claimants receiving a long overdue review of the current rate which is on all the evidence far too high at 2.5%. It also means that Personal Injury lawyers are having to make a difficult decision as regards cases involving future loss. Do we settle the case on the current 2.5% discount rate now or do we assume the outcome of the rate review will be announced, delay the settlement with the possible consequences of further delay to any settlement if the ABI proceed with their action.

What is certain is that during this period of uncertainty, Claimants require expert advice and assistance on these issues.

Mark Hambling is a Senior Litigator with the Association of Personal Injury Lawyers and can be contacted on 01603 675611 and by email at mark.hambling@rogers-norton.co.uk 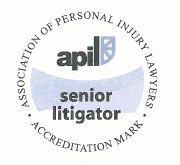